The dark band on the nail.
Let’s begin the list with notorious subungual melanoma. In this type of melanoma, cancer develops on the nail matrix, which is the tissue beneath the nail.

The band is dark to brownish in color and vertical in orientation. Like most other malignancies, this dark band will expand with time. Other important features are bleeding from the affected side, brittle nails, and involvement of surrounding skin.
Unlike other types of melanoma, subungual melanoma isn't associated with sun exposure. Injury or trauma is considered to be the major cause.
The doctor will take a biopsy of the affected area to diagnose subungual melanoma. It is treated with surgery and five year survival rates vary from 16% to 80%. If you identify it earlier, the survival rates are much better.
Nail Clubbing.
If you draw two lines along your nail plate and along your nail fold, the angle should be less than 180 degrees in a normal person. If the angle exceeds 180 degrees, you have the condition called finger clubbing.
When clubbing gets severe, the shape of the fingernail will change to a drumstick like an appearance.

It is associated with a number of disease conditions like Lung diseases such as fibrosis, abscess, and lung cancer, Group of heart diseases called cyanotic heart diseases, liver cirrhosis, and inflammatory bowel disease.
But it can be a normal variant for some people. I still remember how I scared my friend by diagnosing finger clubbing when I was a 3rd-year medical student. Of course, he didn't have any disease. It was congenital for him.
Terry’s nails or white nails:
In this condition, nails are mostly white, except for the pink band at the tip. Please don’t confuse this with lunula. Lunula is the half-moon shaped whitish area of the nails and it’s a normal finding.
Getting back to terry's nails, It can be seen in disease conditions like Liver Cirrhosis, Heart failure, Diabetes Mellitus, Malnutrition and hyperthyroidism.
Pale nails:
The nails are usually pink in color. In this condition, the pink color becomes very light. If you have anemia, which is due to low hemoglobin in the blood, you may develop pale nails. Sometimes pale nails can be difficult to differentiate from terry’s nails.
Yellow nails:
The first thing comes to any doctor's mind when they see a yellowish nail is a condition called jaundice. When there's liver failure, a substance called bilirubin accumulates in the body and gives the yellow color to nails and eyes. But fungal infections of the nails, excessive consumption of carotenoids like carrot, or more severe diseases like lung disease, diabetes, thyroid disease or psoriasis can cause yellow nails.

Beau's lines
Beau's Lines are horizontal ridges across the nails. You can appreciate the ridges and indentations on the nail plate. Don't confuse these with the vertical ridges, which are a normal phenomenon. Beau's lines are associated with diabetes, a vascular disease called Kawasaki disease, hypocalcemia or trauma.
Spoon nails or Koilonychia.
Can you appreciate nails with a spoon like depression? One of the commonest causes for koilonychia is iron deficiency anemia. It could also be associated with Hypothyroidism or hemochromatosis, a condition causing iron to accumulate in the body.
Bluish nails or cyanosis
Bluish discoloration or cyanosis indicates that the body is not getting enough oxygen. Group of heart diseases called cyanotic heart diseases and Many lung diseases like Chronic bronchitis or Lung cancer can cause cyanosis.
Nail pitting or rippled nails
See these narrow pits on nails? Nail pitting is commonly seen with a skin disease called Psoriasis. Therefore you should never ignore nail pitting. It can also occur in some arthritic conditions.

Having said these, you should realize that most nail abnormalities are harmless. But if you notice any recent changes, it could be due to a newly developed disease. Therefore, whenever there is a doubt, visit the dermatologist and exclude any serious illness.

So, do you have any nail abnormality? Let us know in the comments section. Subscribe and click the bell icon for more informative medical videos. 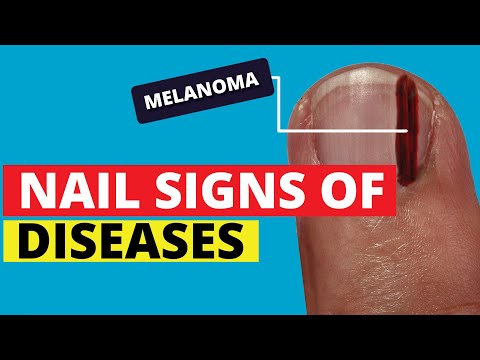